This World Mental Health Day (Wednesday 10th October), we want people to take a WHOLE HOUR for themselves.
Whether it is doing something active and healthy, creative and fun, mindful and thoughtful, or restful and relaxing, there are a variety of things people can do to make them feel good.

Why was the #IAMWHOLE campaign developed?
Now the biggest health concern of a generation, mental health difficulties are costing young people their relationships, education, employment prospects, and without action, their lives. 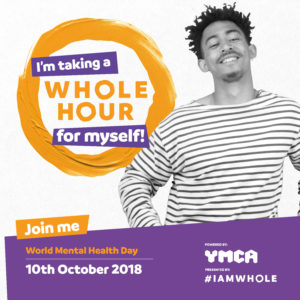 Despite the significant numbers affected and increased public awareness, there is still a stigma surrounding mental health difficulties.

Campaign Videos – Created campaign videos setting out the key campaign messages and calls to action which have been viewed by nearly 600,000 people